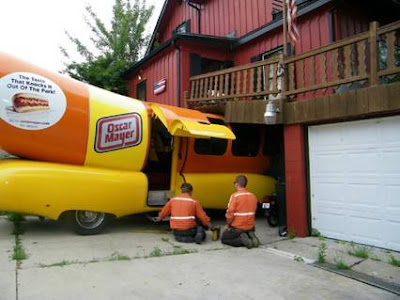 WITI-TV, RACINE - The Oscar Mayer Wienermobile got itself into quite a pickle when it crashed into a Racine home Friday morning.

Neighbors tell FOX 6 the Wienermobile took a wrong turn and ended up on the dead-end street, Kenilworth Avenue in Racine.

While trying to get turned around, the woman driving the hot dog on wheels accidentally hit the gas instead of the brake and lodged the Wienermobile under a house.

Officials say no one was injured in the crash.

The Wienermobile was taken from the scene by tow truck.

No word on the extent of damage to either the house or the giant hot dog.