Beer To be Sold In Dead Animals 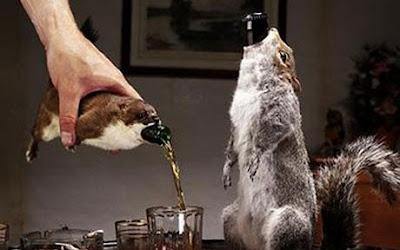 A £500 a bottle super-strong ale is to be sold inside the bodies of dead animals.
The stunt has been condemned by animal rights groups as "cheap marketing tactics".
Twelve bottles of The End Of History ale have been made and placed inside seven dead stoats, four squirrels and one hare. And at 55 per cent volume, its makers claim it is the world's strongest beer.

A taxidermist in Doncaster worked on the animals, which were not killed for bottling the new drink, with some having been killed on the roads.
Outfits featured on some of the animals include a kilt and a top hat.

Via: telegraph.co.uk
Posted by ZombieCreep at 3:19 PM